Carbuyer Review of the Year 2018 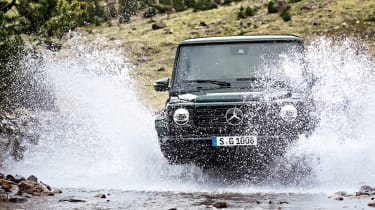 It's been a year to remember in the world of cars and car buying, but which bits of 2018 stick in our minds? Here we look back over the last 12 months on Carbuyer at some of the highlights.

From the exciting cars that have been revealed in 2018, to the most popular reviews, the biggest news stories and the most watched videos, each month of the year has brought something new and interesting to the motoring world and the Carbuyer website.

Below is our rundown of the year’s best moments and content on carbuyer.co.uk:

Among the first big motoring events of the year was the Detroit Motor Show, where we saw the all-new Mercedes G-Class. The big SUV is now available to buy in the UK for just over £140,000 in G 63 form, using a 577bhp 4.0-litre V8 petrol engine.

The idiosyncratic looks and old-school feel of the G-Class have made it something of a cult over the years and it’s become a firm favourite among the rich and famous. The 2018 model is lighter and more comfortable than the previous one, so its continued success seems assured.

Better for the wallet and the environment is the second-generation Nissan Leaf, which we drove for the first time in January 2018. We think its looks are a massive improvement on the previous model and the new 40kWh battery offers impressive performance and range. The Leaf would go on to score an impressive 4.4 out of 5 in our full review. 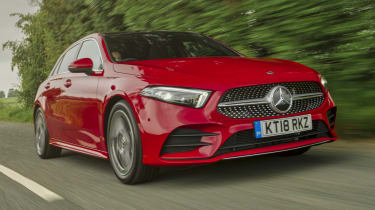 February was the month in which Mercedes officially unveiled the latest Mercedes A-Class. While on the outside the car represented a pleasant but relatively modest update on the old one, inside the interior was a radical overhaul and featured loads of tech lifted from the company’s range-topping saloon models. The new A-Class is more spacious than the old one and has a bigger boot. It would go on to win Carbuyer’s Best Small Luxury Car Award at the Carbuyer Best Car Awards in November 2018.

We drove the BMW X2 for the first time in February and were impressed by the performance, style and surprising practicality. While its expensive, even next to BMW’s own X1, the X2 scored an excellent 4.1 stars in our review. 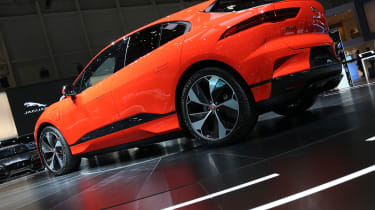 The biggest story of March was the reveal of the all-electric Jaguar I-Pace at the Geneva Motor Show. The I-Pace is Jaguar’s first electric car and the first true rival to Tesla’s cars. Powered by a 90kWh battery, the I-Pace can cover almost 300 miles on a single charge and sprint from 0-62mph in 4.5 seconds. Just as importantly, it looks like a Jaguar and feels like one inside, thanks to a modern, comfortable and luxurious interior.

We drove the facelifted MINI in the first month of spring. The most notable addition was arguably the Union Jack rear lights, but there were some important technology and engine updates too, as well as some extra personalisation options. The MINI remains huge fun to drive and a tempting option if you’re looking for an upmarket car from the supermini class. 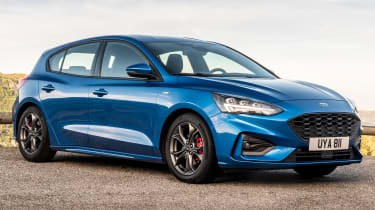 Ford officially unveiled the latest Ford Focus in April. Sitting on a new platform, the car is 20% stiffer than the outgoing model, to make it even better to drive, and is offered in a guise to suit virtually any buyer. Ford announced the luxury Vignale, the SUV-influenced Active as well as the sporty ST-Line trims back in April, as well as a range of punchy engines. The new Focus would go on to score 4.1 stars when we reviewed it later in the year.

A little more exotic was April’s first drive in the latest Aston Martin Vantage. Carbuyer’s Editor-in-Chief got to drive the car before our full UK drive and was thoroughly taken with Aston’s Porsche 911 rival. The Vantage, which uses a 503bhp 4.0-litre V8 engine made by Mercedes, scored 4.3 stars in our review. 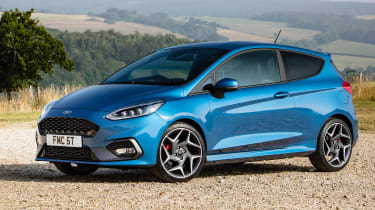 May was the month we got our first drive in the excellent new Ford Fiesta ST hot hatch. Ford changed the previous model’s engine (a 1.6-litre four-cylinder) to a 1.5-litre three-cylinder for the new one, and the result is improved straight-line speed and economy. Handling is even better too, and a new cabin with up-to-date tech makes the ST a great overall package. The Fiesta ST won Best Hot Hatch at the Carbuyer Best Car Awards later in November.

The fifth month of the year was also time to drive the fifth generation of the Audi A6. The executive saloon proved economical, comfortable and beautifully built, culminating in a score of 4.3 out of 5. It remains one of the best execs you can buy.

We also drove the BMW i8 Roadster in May, and saw Rolls-Royce finally give into the pressure and unveil its first SUV, the Cullinan. 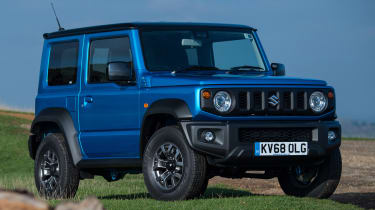 Carbuyer covered some big reveals in June, particularly from two of the upmarket German brands. Audi took the wraps off the new Audi A1, which is set to be one of its biggest sellers, and BMW revealed the new BMW X5 and 8 Series Coupe. Suzuki also showed the world the fourth-generation Jimny, a dinky three-door SUV engineered for tough terrain.

It wasn’t just big reveals and the World Cup in June, however - we also got behind the wheel of the Peugeot 508. The sleek saloon proved a great car to drive as well as look at, securing a four-star rating to put it very near the top of its class. 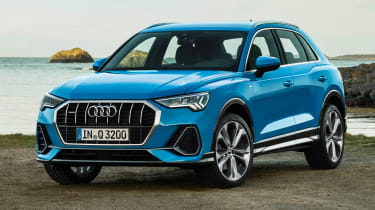 The second-generation Audi Q3 was revealed in July. The latest Q3 has been moved on to the VW Group’s MQB platform, giving buyers a wider choice of engines, and boot space is up 100 litres to 530. The car would go on to score 3.8 out of five when we reviewed it later in 2018. A facelifted Porsche Macan also broke cover in July, with the choice of a diesel engine conspicuously absent.

We drove the characterful but flawed Jeep Wrangler and also published our story on the postcode lottery for those buying residential parking permits. Our investigation revealed a huge discrepancy in council charges across the UK for a one-year parking permit in controlled parking zones. 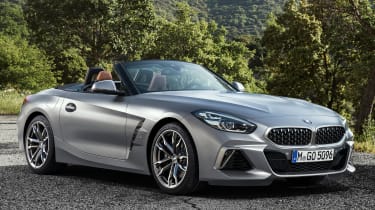 August gave us our first official look at the new BMW Z4, a car designed to take on the Audi TT Roadster and Porsche Boxster. The fastest version at launch was the M40i, which uses a turbocharged 3.0-litre petrol engine to get from 0-62mph in 4.6 seconds. When we drove the car later in the year, we awarded it 3.9 out of five stars; it’s a fun car with an old-school feel but is beaten in a straight fight by both the 718 Boxster and the Alpine A110.

August also saw us drive the new Subaru Forester and updated MG3, and wave farewell to the aging Fiat Punto, which was finally withdrawn from sale after a dire Euro NCAP rating under the car safety body’s latest testing regime. 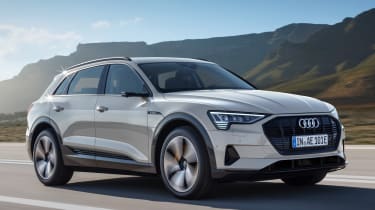 September saw us cover the unveiling of two new electric SUVs from Audi and Mercedes. The Audi e-tron became Audi’s first fully electric car, with a maximum output of 402bhp and a range of 248 miles, while the Mercedes EQC has the same power output and a claimed range of 280 miles. 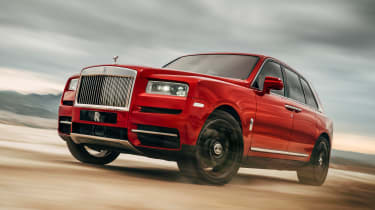 The Paris Motor Show in October saw BMW take the wraps off the new BMW 3 Series. The seventh generation of the car is loaded with technology and, from what we could tell on our first drive in Europe, remains an excellent compact executive car to drive.

October also saw us drive the luxurious Rolls-Royce Cullinan SUV, and cover the unveiling of the new Volkswagen T-Cross, VW’s rival to the SEAT Arona and Nissan Juke. 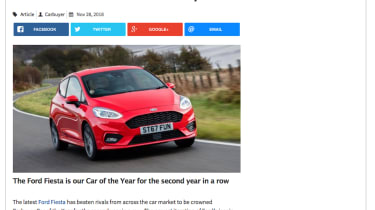 November was a big month on Carbuyer, with our annual Best Car Awards ceremony taking place in central London. The Ford Fiesta took an unprecedented second consecutive win as Carbuyer Car of the Year, while a host of other excellent cars picked up wins across 18 separate categories.

In the news, we covered the reveal of the all-new Range Rover Evoque, the launch of the latest Porsche 911 and the debut of the new Mazda 3 at the LA Motor Show.

November was the month we drove the new Audi A1 and Mercedes GLE. 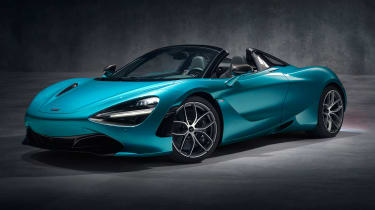 McLaren unveiled the convertible version of the 720S in December. The 720S Spider will cost £237,000 when it arrives in March 2019 and has a lightweight roof that can close in 11 seconds.

December also saw us review the Skoda Kodiaq vRS. The big sporty SUV is quick in a straight line but doesn’t feel hugely poised in corners, and is a relatively niche proposition given its poor economy and high price.